We would like to Welcome Georgia King as The Treehouse & Horse-Events Search for a Star Ambassador for the 2018 event season.

‘Don’t just work on a circle. Ride straight lines in training, not just down the long side of the arena by the wall, but ride them down the 3/4 or halfway line to see if your horse is good at staying straight or tries to drift back to the wall. Also, include serpentine to keep your horse focused and listening to you.’ 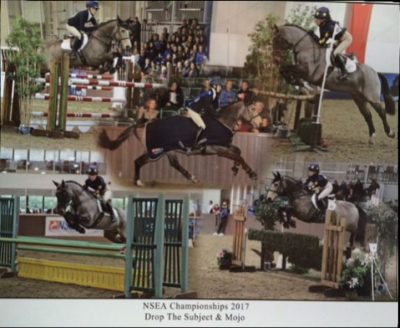 October started well with both ponies at Dauntsey Park. Mojo was in the 100u18 and did a lovely dressage for 30.5 and an awesome double clear with some time to come 6th. This was a great way to finish his eventing for the season! Magic and I had our first novice together; she did a beautiful test in the ONu18 for 29.3 followed by a great show jumping round but an unfortunate pole. We decided not to run her cross country due to her being 18 and the ground being quite deep!

A weekend that I will not forget too quickly was at Wickstead NSEA JWS Qualifiers. Firstly, as I trotted into the ring on Mojo and was announced as the ‘Treehouse and Horse Events Search For  A Star’ winner, the pressure was on to do well! Mojo did not disappoint and did a great round in the 90 to win individually and be part of the St Johns winning team. Magic did not want to be outdone by Mojo and she jumped two lovely rounds in the 1m and 1m10 to win both! This meant both ponies had qualified for Addington at the end of October. The next day I took Rathcline Dun Shadow (Truffle) owned by Holly Farr to Calmsden BE90. He was a star and did a nice test to get 35.8 and fantastic double clear to finish just outside of the top ten!

Towards the end of the month, I took Magic to a 2-day pony training at Aston Le Walls. She was absolutely brilliant and we learnt lots too.

The first weekend of half term was the NSEA Championships at Addington. A weekend to remember! On the Friday, Magic started off with a speedy and clear first round in the 1m10 show jumping, to be placed in the top 8, which meant we jumped off in the main arena later on that night. That evening she was incredible to jump a foot perfect and fairly quick clear which resulted in us finishing as NSEA 1m10 Pony SJ Champions!

On Saturday, Mojo came out rather fresh in the KBIS 90 JWS to have a pole and a runout due to too much speed! However, he then calmed down a bit and jumped a lovely clear in the Squibb Group 90 team SJ, but unfortunately our team, St Johns, missed out on getting to the main arena by 2 seconds! Later on that day it was Magic’s turn again in the KBIS 1m10 JWS. Once again she was incredible, an unfortunate pole but the only pony to make the time meant we became NSEA 1m10 JWS Pony Champions. A double win for Magic!

On Sunday, I had one class left to do and that was the 1m JWS on Mojo. He jumped impeccably and did a fantastic clear to get a style of 4.5 but unfortunately picked up some time which dropped up to 9th, one place out of the rosettes!

All in all an amazing way to end the season! A quieter time for us all now, before we get going again at the winter BE JWS Series along with training.